SEARCY, Ark. – When Deluxe and the Hulu show Small Business Revolution came to Searcy, they brought with them improvements to more than six local businesses and a revolution the town is still feeling the benefits of. What they left behind, along with a community-wide desire to continue to see Searcy grow, were two new pieces of public art that add to the already growing art movement.

The “SBR Shoe” mural is located in Art Alley; an outdoor art gallery located in downtown Searcy. The mural was painted by local artist Jason White and features an orange high-top sneaker representative of the shoes Amanda Brinkman, host of the Small Business Revolution, sports regularly.

The final touch for the work was getting it signed by Brinkman, her SBR co-host Ty Pennington, and the film crew from the show. 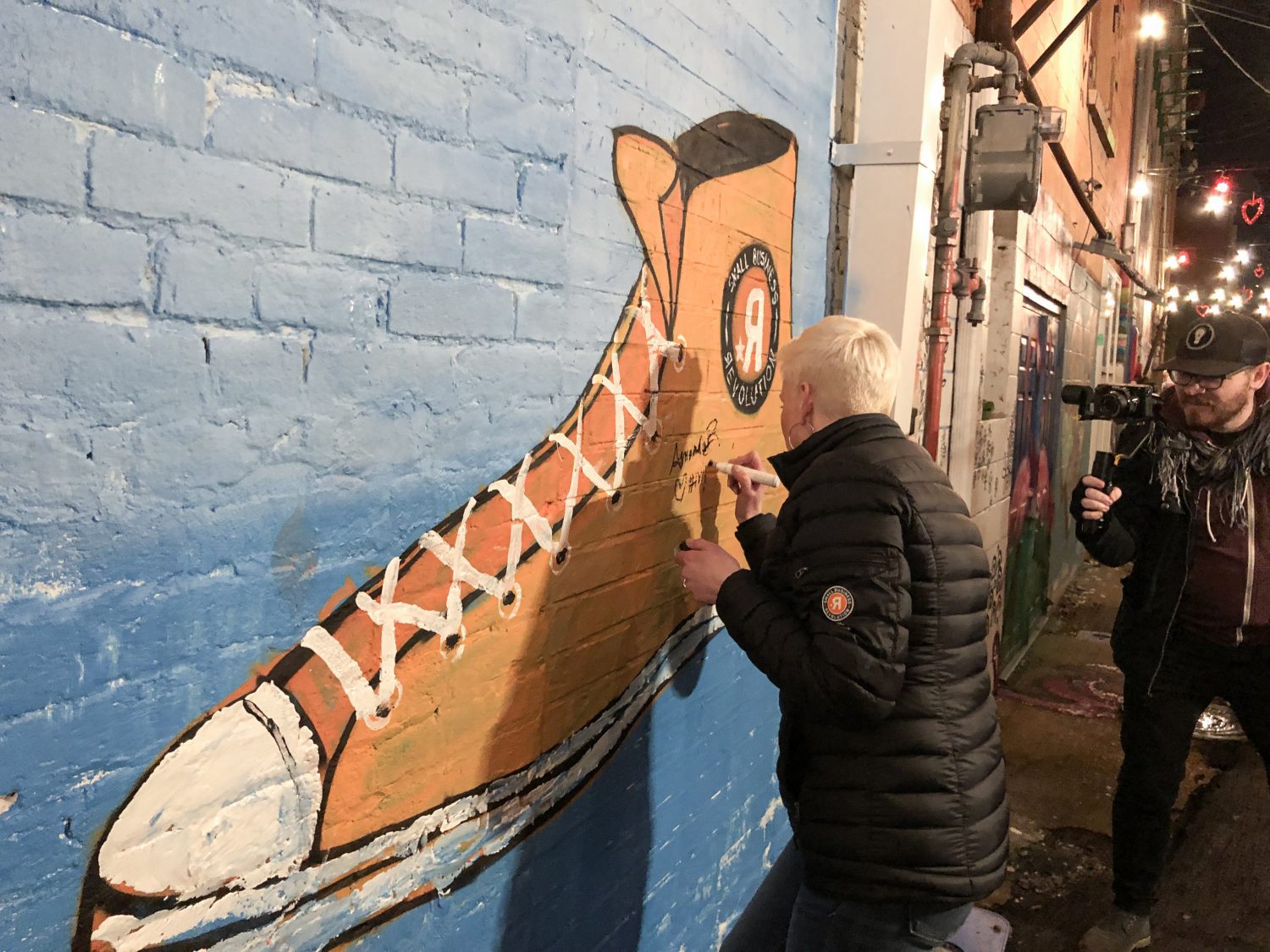 While murals in Art Alley are usually replaced every three months, the “SBR Shoe” won’t be going anywhere.

“Amanda Brinkman is known for her bright orange high-top Converse shoes,” said Mat Faulkner, Chief Idea Officer of Think Idea Studio and Director of Think ART Project. “During Deluxe’s site visit to Searcy, I asked Jason White, local muralist, if he could run down to Art Alley and paint a shoe mural that Amanda and the Deluxe team could sign as a memento for Searcy.”

“It happened about 45 minutes before the first event at Robbins-Sanford,” recounted Jason White. “Mat mentioned that it might be cool if we had something painted in Art Alley for Amanda to see. I left to paint the shoe and made it back just as the event started. It was amazing to get to hang out with Amanda and the film crew after the event.”

“At that time, we had made the top 10 but didn’t know we would win the whole contest, so we wanted something to remember the experience by,” said Faulkner. “Now, it is an attraction for tourists, and we are excited to provide a nearby space for visitors to sign too that they came to Searcy and ‘Experienced the Revolution.'”

Visitors to Searcy are now able to leave their mark in Art Alley as well, as the wall space next to the “SBR Shoe” mural is available for guests to leave their signature.

Art Alley is open 24-7. That said, the best time to visit is during First Friday Art Nights. The events are held on the first Friday night of each month beginning at 6:30 pm with no firm ending time.

Visitors can watch artists create and paint murals while listening to live music and enjoying food provided by local food trucks and nearby eateries.

Guests are also encouraged to check out local art studios around Searcy to see changing exhibits, unique crafts, and participate in activities.

Together We Can Do So Much

After making your way down Art Alley, take a short stroll one block west and you’ll find Deluxe’s final gift to the Searcy community; the “Together We Can Do So Much” mural painted on the west side of Crafton’s Furniture & Appliances. 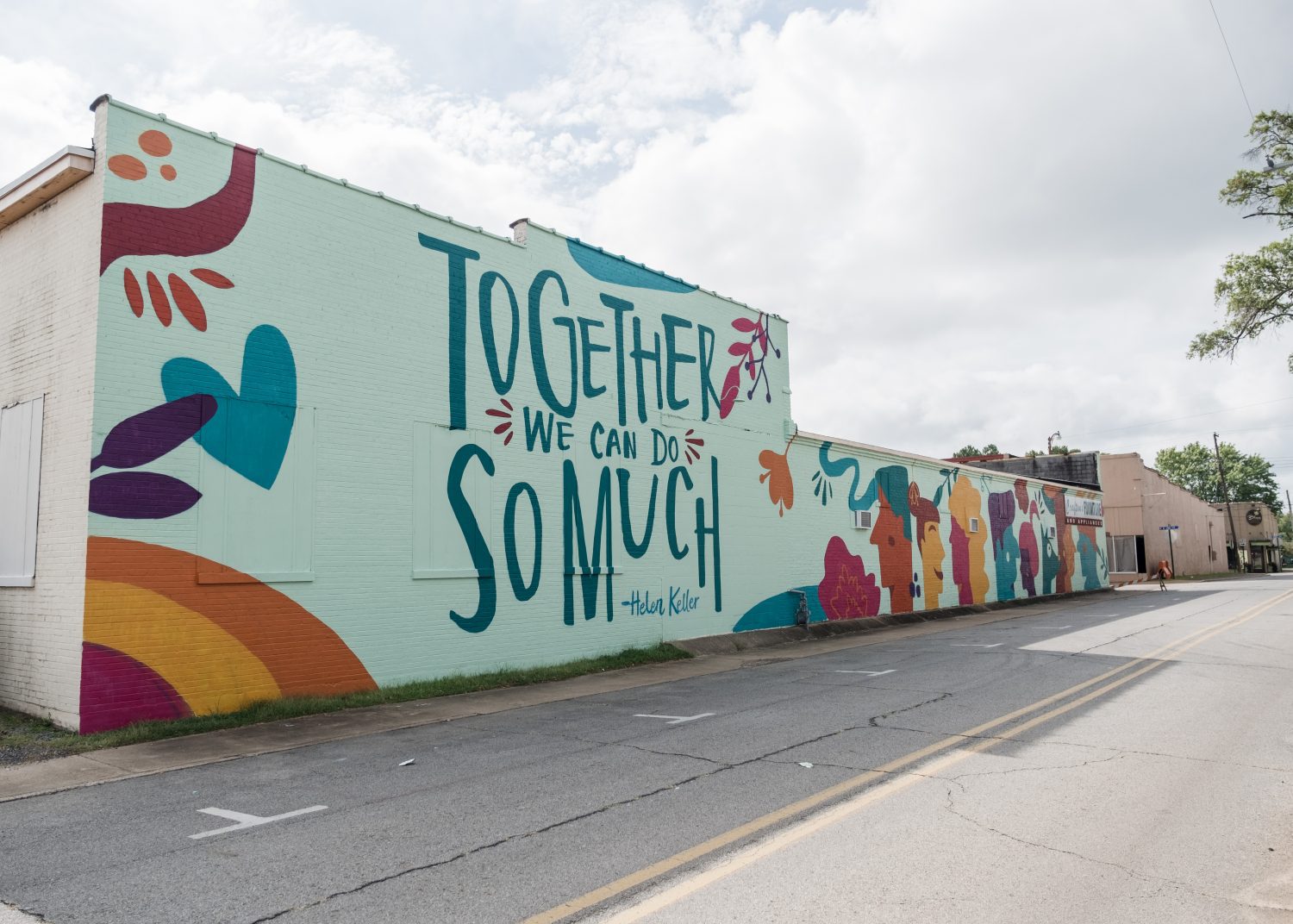 For the mural’s design, Deluxe sponsored a public contest. Twenty-one submissions were entered, which Deluxe narrowed down to three for a public vote.

The winning design was created by local artist Tara Peacock, who also designed and helped paint the “Natural Notes” mural on the east side of Quattlebaum Music in downtown Searcy.

“’Together We Can Do So Much’ includes abstract faces that represent the diversity of individuals that make up our community and our nation,” said Peacock. “Bright colors and accents tie the design together and create a youthful, artistic, and positive backdrop.”

Peacock says the idea for the mural came from the quote included in the mural.

“‘Alone we can do so little. Together we can do so much.’ is a Helen Keller quote that I believe embodies the Revolution,” said Peacock. “The goal of our community is to continually move forward and make this the best place to live, work, raise a family, and ultimately do life together. We each have ideas, talents, and things that make us special that we should share with our community! Our differences should be owned, embraced, and met with kindness.”

This mural was also painted by Jason White of White’s Artworks and didn’t get finished without a little drama.

“The ‘Together We Can Do So Much’ mural was an insane deadline,” said White. “The deadline to complete it was August when the crew would be back in town to shoot some B-roll and a few final shots. After the design contest, building owner approval and wall prep, I had five days to complete the mural. Add in a touch of bronchitis and 112-115 heat indexes, it was a stressful week!”

Despite the tight deadline, White said the job was one he’s glad he did.

“It was so worth it,” said White. “Tara did an amazing job with the design, and I think it makes an excellent entrance not only into Searcy from Hwy 16 but a great entrance to the Arts on Arch Arts District. The support and kind words from the community have been amazing!”

The art scene in Searcy has been on the rise for two years. Think ART Project has been working to bring art installations to town, completing three murals, Art Alley, Citizen’s Park music venue, public basketball court rehabs and painted pianos. The Think ART Project volunteer committee has several upcoming projects in the pipeline including a living plant alley and public sculptures. 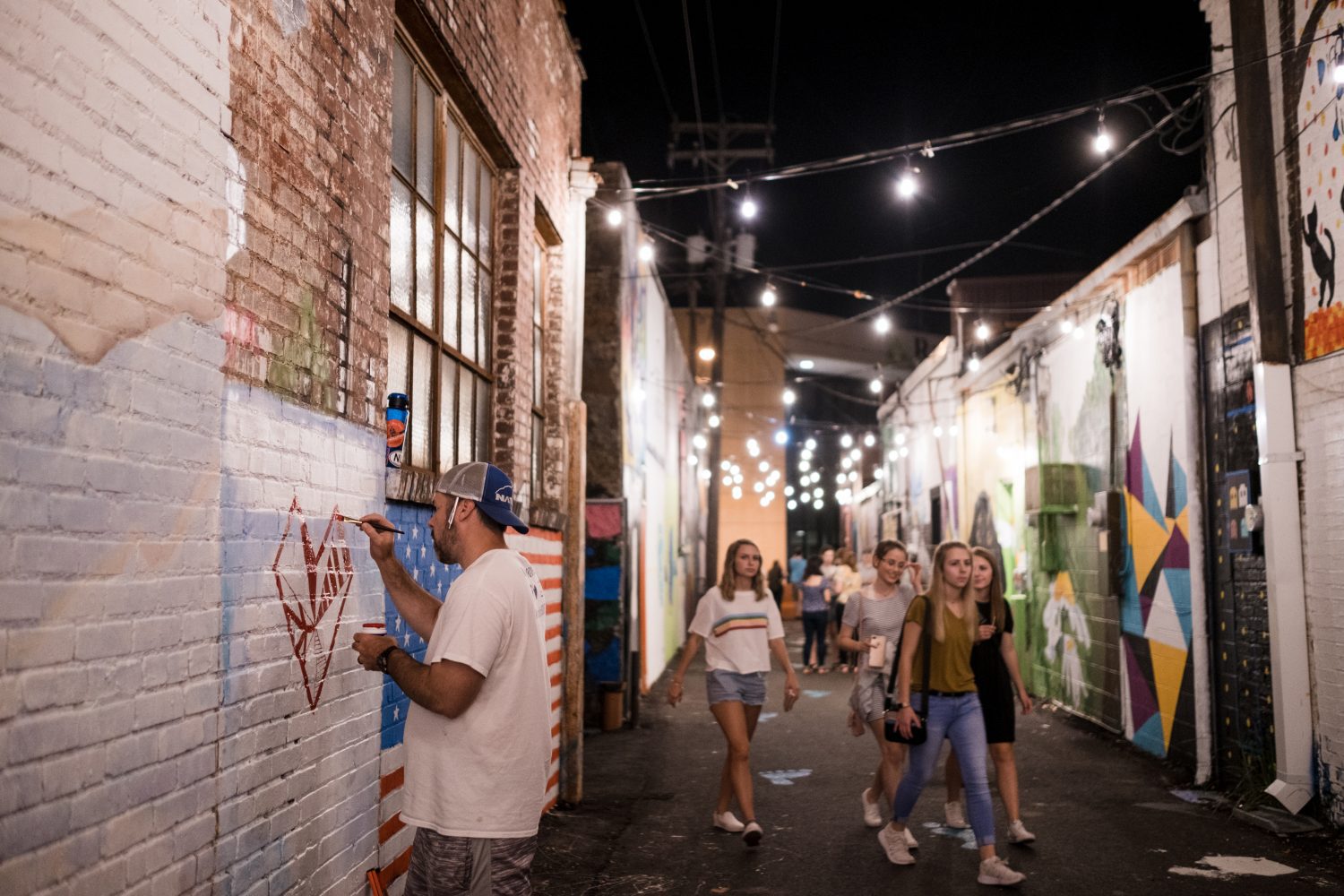 Along the way, others have gotten onboard with the public art trend. As of now, there are 13 pieces of public art in and around downtown Searcy available for viewing. You can find them all at GoSearcy.com or on Searcy.com’s mural map.

Those interested in First Friday Art Nights – including artists with a desire to paint – as well as other events put on by the Think Art Project can visit their Facebook page.