SEARCY, Ark. – Using nothing but cans of spray paint and walls as his canvas, street artist Skye Walker hopes to bring inspiration to communities across the country with his “Sea to Sea Mural Tour.” That includes right here in Searcy, where one of Walker’s works of art is now on display on the tin wall behind Beyond Boundaries.

After starting out in San Diego, California back in June of 2018, Walker and some friends have been on the road, living out of a Sprinter van spacious enough to call home. The group plans to make a loop around the entire country. So far, Walker and friends have visited more than a dozen towns and cities. That includes a stop in Northern California, catching some waves off the New England coast, experiencing “Music City” down in Nashville, Tennessee, and right here in Searcy.

Walker never made any original plans to visit Searcy but added the stop thanks to Beyond Boundaries. The two worked together previously on some t-shirt designs that are now available in the store. Eventually the conversation led to his tour and the idea of Walker painting a mural behind the store.

The idea for the painting behind Beyond Boundaries was inspired by a shared love for nature and exploration – a theme that fits well with the retailers’ outdoorsy brand. “We picked Mount Elbert from Colorado — and that’s what it is – to transport you from Searcy, Arkansas to the Rockies and to give you a place to breathe and think and let your mind wonder,” said Walker. “I think and I hope that’s what it did.” 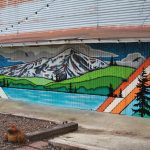 Walker enjoys exploring the great outdoors and portrays many of his own experiences in nature on the walls he paints. As with the mural here in Searcy, most of his artwork uses vibrant colors to depict actual locations, whether it be the Rocky Mountains or a scene somewhere along the west coast. His work also often includes colorful faces and abstract shapes to create much more than just landscape art.

One of the biggest reasons for the “Sea to Sea” tour has been to travel to places where Walker wouldn’t normally end up. So far along this journey, the communities in which he has spent time, and the people he has interacted with, have helped inspire him to continue creating art.

” The best thing about the trip so far has been the people,” said Walker. “It’s been great to create art, but to connect with people along the way who have been very open and kind and welcoming to somebody they didn’t know or know through a friend has been very refreshing… It reminded me of how great the U.S. is and how willing people are to help, especially when it’s something like bringing art to a community.”

Walker’s arrival in Searcy couldn’t have come at a better time. When most small towns are reserving their public wall space for artwork promoting that community’s history, Searcy has seen a strong push to promote a variety of expressive works. Multiple creative murals have already gone up in and around downtown Searcy thanks to the Think Art Project, with more planned for 2019.

Walker believes that public art can strengthen the communities by starting conversations between different groups of people – many of whom would have never had the chance to meet. “When you’re getting art up on a wall, it’s getting people to communicate and get educated about art history and/or history of where they’re at,” said Walker.

Along with opening up communication in the community, Walker hopes that public art will do the same thing for others that it did for him as a child; inspire.

“I’m not necessarily saying it’s going to make everyone want to become a muralist, but it might inspire them to be like ‘if that guy can do that, then I can start my own business’,” said Walker.

After leaving Searcy, he headed west with plans to wrap up the tour back in San Diego by the summer of 2019.