SEARCY, Ark. – Imagine sitting in a Memphis-style barbecue restaurant with a juicy slab of ribs on your plate as the sound of an Alabama Shakes song reverberates across the room. That’s the feeling that local restaurant owner, Charles Glenn, is hoping to bring to Searcy with Glenn’s Smokehouse.

The Main Street barbecue restaurant takes you back to your roots with a brand-new look. Owner Charles Glenn recently decided to add the “blues” theme with some help from OakenElk owner Jake Reeves, who has been a friend of Glenn’s for years.

“We have pretty big plans for what we’d like to see this become,” said Reeves. “The new look was inspired by an old southern or Chicago-style blues club”

When you walk in the door, you’ll notice the hanging lights and walls adorned with images of famous Blues musicians and bands, and posters of iconic live concerts. It’s something Glenn hopes to continue to add to with the public’s help. Customers who bring in their own music posters, concert stubs, or wall art to add to the collection will receive 10% off their order. While the look is new, some things, like the ownership and the menu, haven’t changed. The small red, white and blue house-shaped structure, which has been made familiar to many Searcy residents as Grandpa’s Bar-B-Que and The Flying Pig, has remained in the Glenn family for as long as it’s served customers delicious barbecue. As for the menu, whether you order their fall-off-the-bone ribs, tender pork or fresh catfish, you won’t leave disappointed – that’s how it’s always been. Charles spends hours a day out by the grill to ensure his customers are satisfied with everything on their plate.

“I love cooking,” Charles said. “Barbecue is my favorite thing to do. It’s a passion!”

Customers remain loyal to Glenn’s for a couple reasons. First, it truly is hard to beat the taste of his signature barbecue sauce. That, and customers gravitate to the family-style atmosphere that the restaurant has held on to through all the years and multiple name changes.

Several employees are either personal friends or family to Charles, and whether you’re inside or out on the porch, you feel like a part of their big, happy family. 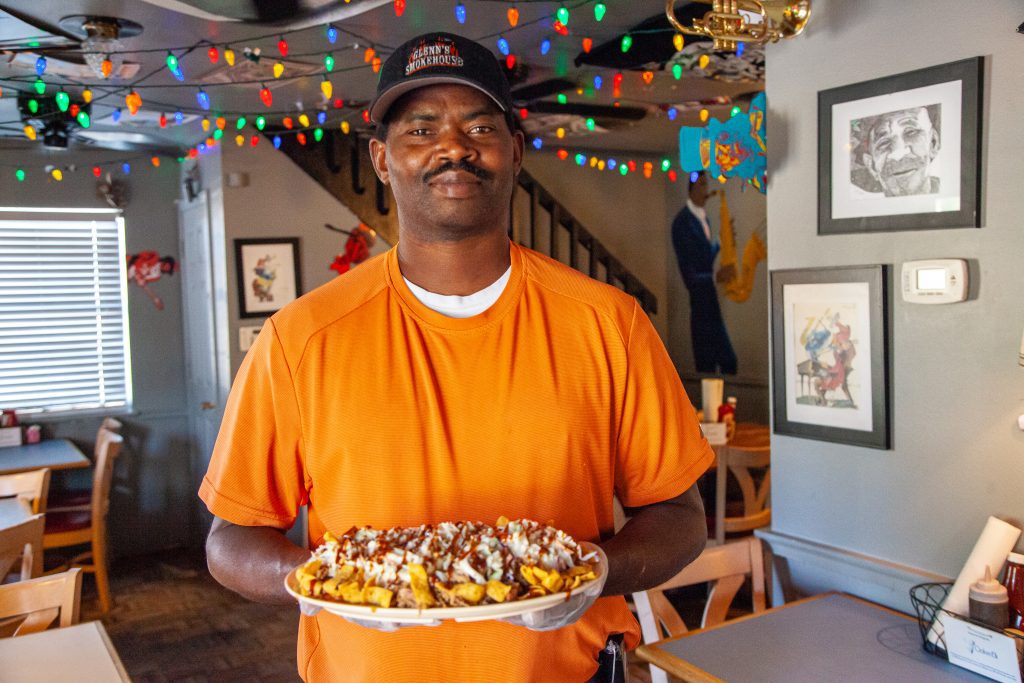 While Glenn’s has the food part down when it comes to getting people in the door, they’re hoping to do even more on the music side. The strip of highway that the smokehouse sits on was once a center for live music in the area, and both Glenn and Reeves are hoping to revive that with Glenn’s at the center.

“That is a goal – starting here with Glenn’s as the flagship but creating Searcy as a music hub where legit musicians want to come play,” said Reeves. “Our belief is if we build this place that’s got this great atmosphere and really caters to music that we can attract good artists to come play here.”

Reeves, who is also a member of local Indie Rock band, The Fable & The Fury, wants to see more artists, like himself, find spots in Searcy to perform for the music lovin’ food junkies.

“What I grew up with was going to Memphis and listening to music,” said Reeves. “In Searcy, there was really nowhere you could go with good roots music.”

Glenn has intentions to eventually build an outdoor porch and include a small stage, where bands can entertain dozens of locals. Glenn and Reeve’s vision with their upcoming project is to create a community spot for Searcy residents.

“You’ve got big tables and everybody eating and listening to music outside, and kids playing and dancing and it just being a true old-world communal feel,” said Reeves.

Glenn’s Smokehouse is bringing new and exciting changes to Searcy very soon, so be on the lookout for what’s to come! For more updates and information, visit their Facebook page or website.