SEARCY, Ark. – The Revolution that overtook Searcy in 2019 resulted in several improvements that the city and its residents will benefit from for years to come. Along with a beautiful new mural and business makeovers, the lasting improvements included Citizen Park, a vacant concrete lot transformed into a beautiful outdoor venue in the heart of Searcy’s growing
downtown Arts District.

Citizen Park, located on West Arch Avenue, just a few doors down from Center on the Square, has been transformed into an outdoor stage and gathering space that’s available for public use, thanks to the collaborative efforts of the Think ART Project, Harding University, multiple local businesses, and the Small Business Revolution. Along with the beautiful stage, Citizen Park
features four unique I-beam arches decorated with ambient lighting and a large green AstroTurf sitting space for audiences to relax and play on.

The park has hosted live music concerts during Beats & Eats events, weddings, a baby shower, and other activities. But those involved in casting a vision for the future uses of the park are expecting a lot more to come.

“I would like to see the park be a way for citizens to have something to do,” said Mike Parsons, Searcy Parks and Recreation Director. “Something monthly or weekly, whether that’s outdoor  plays, bands and musicians, or any type of entertainment.”

“The park has the power to gather the community together, gather different segments of the community and bring them together with the arts,” said Mat Faulkner, Director of the Think ART Project.

The idea for the park began prior to the Small Business Revolution coming to Searcy. The Think ART Project, the volunteer committee behind Art Alley and the initiative to create an “Arts District” in downtown Searcy, saw the potential for the vacant lot to become a creative performance and gathering space for everyone in Searcy.

“Years ago, it used to have a few structures, some pergolas and benches,” said Mat Faulkner, director of the Think ART Project. “However, the structures were often vandalized, so they were removed by the property owner and then it just sat empty for several years.”

The property owner is Don Raney, a lawyer and alderman in Searcy whose legal office is next door to the venue.

“We thought at one point the Lightle Law Firm would expand and build additional space for the firm but that did not pan out,” said Raney.

Raney, Faulkner, and others involved in the Think ART Project, saw the potential for the space and wanted it to become an asset for the city. Raney now leases the space to the city, with a long-term plan of donating it to the city permanently after 10 years.

“It is my goal and desire to transfer the Citizen Park property to the City at the end of the ten- year lease term and it is being maintained for the intended use accordingly,” said Raney.

The design for the space was a collaborative effort between Harding’s Interior Design program and local architect Barry Hoffmann. Think ART Project initially connected with Harding professor Amy Cox with the hope her students could design concepts for an outdoor multi- purpose space.

“The students met with Mat Falkner and Brit Lynn — a professor from the University Theater department — at the site and discussed the vision for the area,” said Cox. “They worked together in teams to develop models and concepts for the space over the course of one week. Then they presented their ideas to Mat, the owner, and other city leaders such as Parks and Rec, and Mayor Osborne. After the feedback from the group, Mat, Lynn and I met to discuss the development of the plans. I gave those notes to a group of students who took the design through the next phase of planning.”

At the time the plans were being developed, there was no funding for the project. Until the Small Business Revolution (SBR) came to Searcy.

“It was perfect timing,” said Faulkner. “The Small Business Revolution producers were seeking ideas for a community improvement project and since we already had the rendering from the students, it was a perfect match.”

Architect Barry Hoffmann was brought in and donated his time to work with the Harding students, SBR, and Amy Cox to develop the final design.

“Hoffmann Architectural has always tried to support our community, and we are grateful that Searcy has been very supportive of us,” said Hoffmann. “We incorporated as much of the students’ design as possible. The students did a great job.”

Hoffmann says the project offered a unique opportunity that is dear to his heart.

“Historic downtowns are one of my favorite build environments, and to be able to contribute to the preservation and advancement of our own downtown is wonderful,” said Hoffmann.

Along with $60,000 from SBR, different businesses in town contributed to help get the project off the ground.

“Connell construction deeply discounted their bid. Hoffmann Architectural donated his time working with the students’ designs. White River Flooring donated stain and sealer for the concrete and installed the city emblem in the front of the park for free,” said Faulkner.
___________

The Park has already hosted a number of events, but the hope of those involved is that it becomes a regular hotspot for activity.

One reason Mike Parsons believes the space is being underutilized is that people don’t realize they can use it.

“I don’t think people realize they can reserve the space,” said Parsons. “It’s the same fee as renting a pavilion, $20 for two hours.”

The public isn’t required to reserve the space to use it, but it is a good way to make sure it’s available when you want it. Mat Faulkner hopes anyone looking to showcase their talents, be it music, performance, or something else, utilizes Citizen Park.

“Just to see people use the space, even if it’s not with a formal performance, but to see some kind of music down there, that would be great,” said Faulkner. “We would also like to see it used for dance recitals and theater in the park.”

Parsons says that Parks and Recreation would be happy to work with any group or organization to help bring events to the space.

“If someone, a group or organization, approached us about a weekly or monthly event, we would absolutely work to help make it happen,” said Parsons.
__________

While the park is ready for use, it is not yet complete.

“There are some elements such as lighting and stage covering that are still planned but not funded,” said Cox.

“The long-term goal is to have the arches lit up with LED lights so we can have light shows in the evenings,” said Faulkner. “It’s a way to address the lack of things to do during the evenings in Searcy, specifically downtown. We also have plans for a canvas structure that will go over the stage to help protect performers from the weather.”

At the moment there are no funds for the final phase of this project, but Think ART Project has made it a goal to fundraise to complete the park. They view it as a vital piece to turning that stretch of West Arch into Searcy’s very own Arts District.

“We started this project and we aim to raise the funds to complete it,” said Faulkner. “It’s really a continuation of our effort to create an Arts District downtown.” 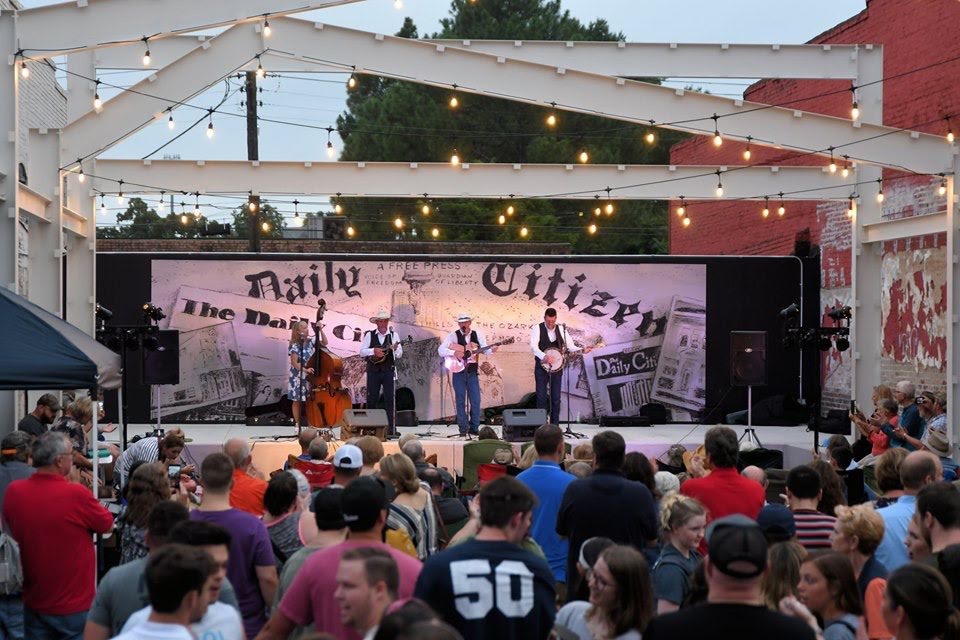