Searcy firefighters go beyond the call for local resident

SEARCY, Ark. –After responding to a call about a house fire a few weeks ago, the Searcy Fire Department was able to go above and beyond the call of duty by helping a citizen with limited mobility be able to leave his house unassisted.

The call came in the early hours of May 10th. When the firefighters arrived at the scene, they found the house was full of smoke with the occupant still inside. After evacuating the resident, they discovered he had no way to get in or out of his house without assistance due to his limited mobility.

“He was at the door and couldn’t get out,” Searcy Fire Department Firefighter Hunter Heep said.

The resident was able to use a walker with assistance during the day, but only used a wheelchair in the evenings and early hours.

“We [needed] to get this guy a ramp so he [could] evacuate,” Searcy Fire Department Fire Captain Andrew Bogan said.

Firefighters decided they needed to help build the ramp so he would be able to safely evacuate his home at any time of day, with or without assistance.

“We were all on the exact same page,” Heep said.

After consulting the Searcy Fire Department Women’s Auxiliary for funding, they went to Lowe’s Home Improvement to get the materials. According to Heep, after the crew explained the situation, the store offered materials at a greatly discounted price to help with the cause.

They spent the next shift constructing the ramp as a team and completed it within the day. The ramp gave the resident more than an evacuation route, it gave him an opportunity to have a little more independence.

“[The ramp] gives him liberty to go out and see the sunshine,” Bogan said. 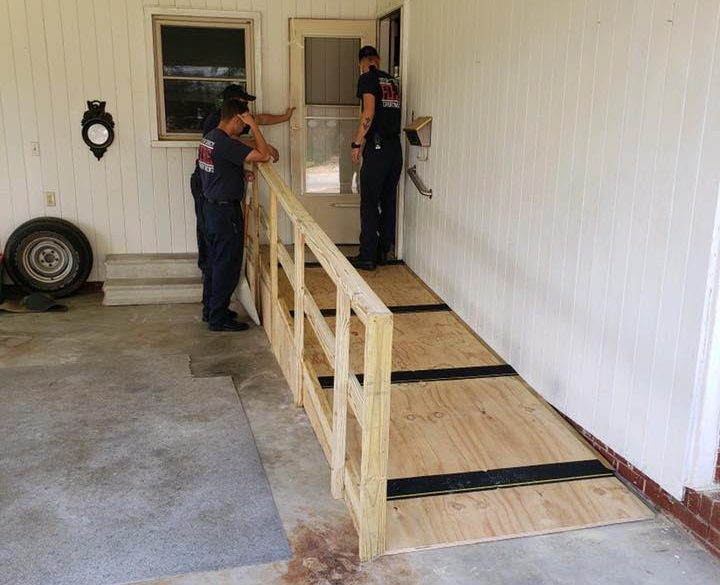 According to Heep, the occupant of the home was happy with the result after the project was completed. Both Heep and Bogan said the project to be mutually beneficial.

“When we got together, we were able to create something out of nothing,” Heep said.

Fire Captain Bogan said these kind of projects are something the fire department enjoys to do because helping people and promoting safety are two of the most important parts of being a firefighter.

“We’re community driven, we’re people driven,” Bogan said. “Any fire crew in Arkansas would have been willing to do the same thing.”