SEARCY, Ark. – The Christmas season officially kicks off in Searcy when the Holiday of Lights gets underway during Thanksgiving Week.

“Holiday of Lights” is the umbrella title for every Christmas-related event that goes on in Searcy from the beginning of November through the end of the year.

“Holiday of Lights” was brought back to Searcy in 2015. Since its return, thousands of Arkansans make the trek to Searcy every year to take part in dozens of holiday events, including light displays, carriage rides, unique shopping experiences, skating in Spring Park, and the Living Nativity.

It all truly kicks off with the annual lighting ceremony*. This year’s event will be a little different; along with being held on Tuesday, November 26 instead of the Friday after Thanksgiving, the ceremony is being moved from the Courthouse Square in downtown Searcy to Berryhill Park.

“The courthouse is not going to have as many lights this year because it’s undergoing a restoration project in the month of December,” said Thurmon. “However, we are going to have more lights downtown on the other buildings than ever before. We are putting lights all the way down Spring Street and on the buildings around the courthouse.”

While the ceremony is moving to a different location, you can still expect to be ‘wowed’ when the lights go on. Berryhill Park always features close to a million twinkling bulbs shaped into dozens of holiday-themed displays. With the lighting ceremony moving to Berryhill, Thurmon says they’ve upped their game this year.

“We have really beefed up Berryhill and ordered a lot more lights,” said Thurmon. “When we started Holiday of Lights, we actually had lighting ceremonies both downtown and at Berryhill. We’re lucky to have two areas that are so perfect for this kind of event.”

There will also be a unique installation at Berryhill that Thurmon believes visitors will really enjoy.

“A collection of local artists have painted some wooden Christmas trees that are going to be on display at Berryhill,” said Thurmon. “They will be auctioned as a fundraiser for Holiday of Lights.” Along with the lights, attendees will be able to enjoy hot chocolate as well as s’mores prepared by First Security Bank on the Teal Grill. There will also be musical performances by the Searcy High School band and the Van Patten Handbell Choir from Searcy First United Methodist Church.

Searcy’s Santa will be making his first appearance at the lighting ceremony. Afterword he will make regular appearances in the Santa Hut on the Courthouse Square through Dec. 24th. Kids can visit with Santa, get a picture, and let him know what they’d like for Christmas.

Berryhill Park won’t be the only lights on display in Searcy. Harding University will flip the switch on more than one million LED lights on Monday, December 2nd. Visitors can enjoy free hot chocolate and Christmas music at the lighting ceremony then come back to enjoy the lights again through New Year. 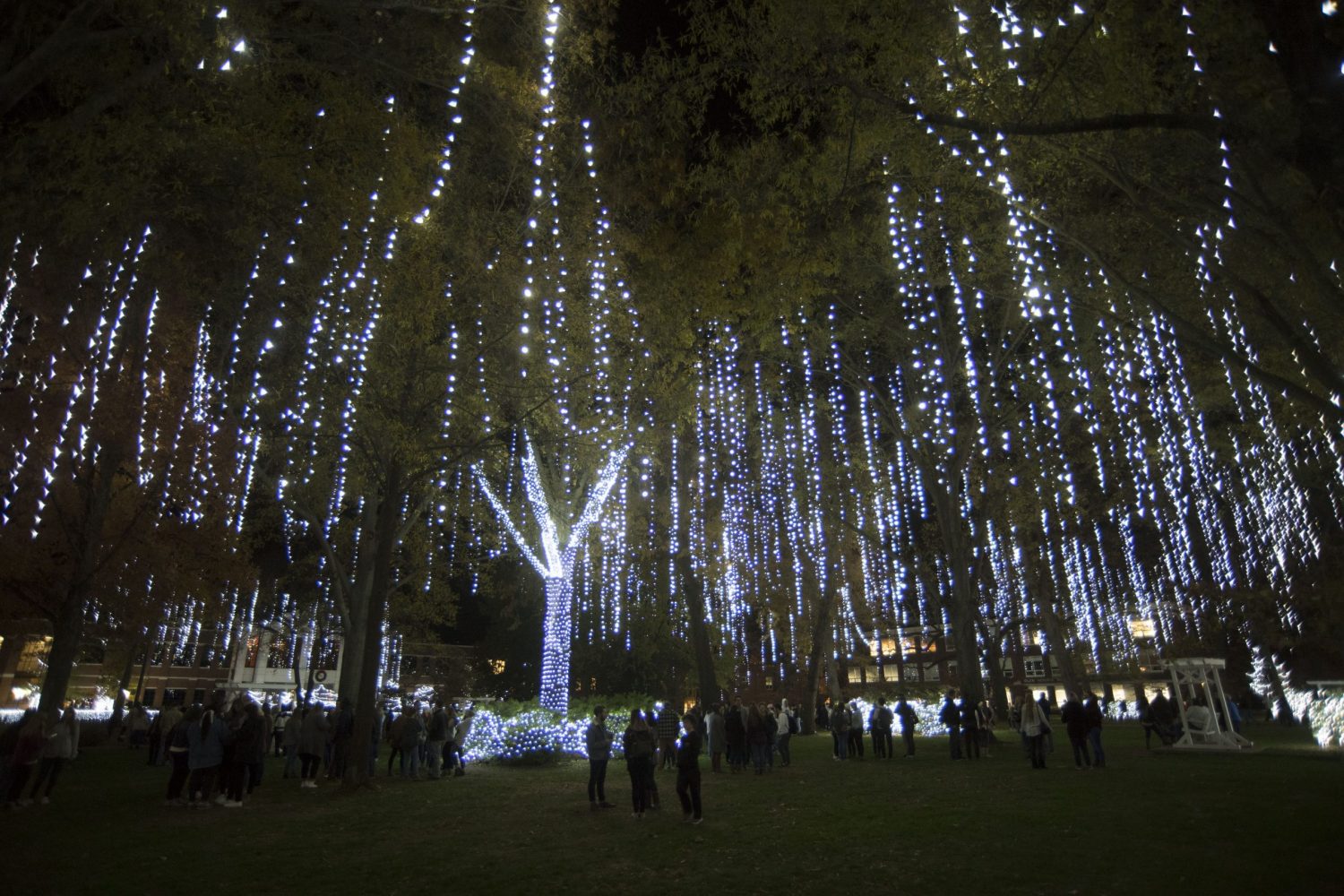 The annual Searcy Christmas Parade will be held the evening of Saturday, December 7th. The parade will take its usual path around downtown before heading down Race Street and finishing at Berryhill Park.

“It’s really neat that anyone can enter the parade,” said Tillie Slavin, Searcy resident and parade enthusiast. “All they have to do is have lights on their float. It’s so much fun to bundle up and see the lights and creativity on each float. It’s a great family activity and I’m so excited to bring my daughter for the first time.”

For those looking for less tradition and more unique holiday events, you can start early by taking in one of the largest Santa collections in the United States. 85-year-old Wanda Emde spent over 50 years collecting nearly 1,700 Santa pieces for her collection, most of which are on display at the Carmichael Community Center. The “Deck the Halls with Santa” display is available for viewing through December. You can also find other pieces of her collection around town. 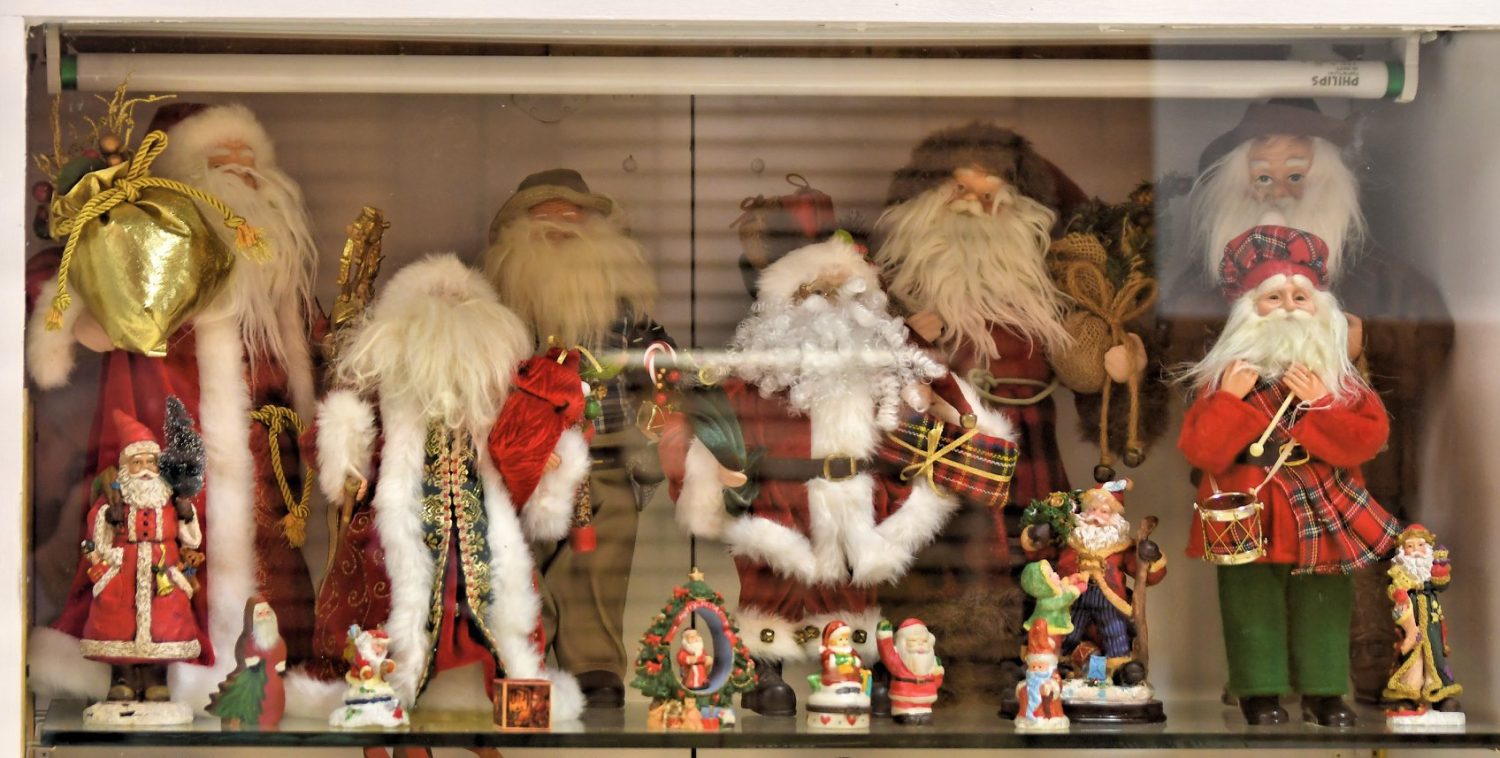 When you’re in town for the parade on December 7th, make sure and visit Searcy’s Pioneer Village for their annual Old-Fashioned Christmas.

“Definitely stop by Pioneer Village,” said Thurmon. “We’re very lucky to have a historical society that does such a great job, both with the village overall and the holiday event in particular. People look forward to that all year.” “Then of course there’s the Living Nativity,” said Thurmon. “It draws thousands of people every year.”

After taking 2018 off to rebuild parts of the display, the Living Nativity is back at Searcy First Assembly of God. Visitors can drive through Bethlehem and witness the story of the birth of Jesus, like a living storybook. The event is free and draws between 10-13 thousand people each year.

“There are so many events to mention,” said Thurmon. “The ‘It’s a Wonderful KLife Fun Run’, the ‘Annual Tour of Homes’ that the Women of Harding do such a great job with. There are shopping experiences like the Holiday Craft Fair and Holiday Pop Up Shop. Don’t forget Skating at Spring Park which is back for a third year.”

One other new event to mention; the Polar Express Party. Main Street Searcy will host a showing of the now-classic Christmas film at the historic Rialto Theatre in downtown Searcy at 10 am on Saturday, December 14th. The event costs $7 and includes hot chocolate, a bell-like in the movie—and the opportunity to take selfies with Santa. Kids are encouraged to come in their pajamas. Proceeds benefit Main Street Searcy.

You can find the full list of events at the Searcy Holiday of Lights Facebook page where details and information are posted regularly.

*The lighting ceremony at Berryhill Park has been canceled due to weather. The lights will still be turned on Tuesday, November 26th and the Spring Park Skating Rink will open as planned on that night.